he FCC's auction of 280 MHz of spectrum spanning 5,684 midband licenses between 3.7GHz and 3.98GHz is now underway, and should last until early in the New Year. Many analysts expect this "C band" auction to net the FCC close to $45 billion.

C Band is attractive to wireless service providers who lack significant midband spectrum. For example, Verizon has less low-band and mid-band spectrum available than either AT&T or T-Mobile, and is expected to pay at least $10 billion at this auction, likely more.

Mid-band frequencies are critical for 5G usability, since they can provide both improved speeds vs 4G LTE while also providing better coverage.

The benefit of C-band, compared to mmWave, can be assessed from two different viewpoints:

As an analogy, consider having a conversation with someone standing next to you at a music concert. It’s difficult to hear them. In much the same way, without a filter upgrade C Band satellite reception equipment could be overwhelmed by 5G service.

Mobile operators will also require new infrastructure. Analysts estimate that each US operator building a nationwide network with C Band spectrum will need to spend between $3 billion and $3.6 billion for the wireless equipment necessary to broadcast 5G signals in this band.

While operators may focus their license usage in the consumer space, enterprise can also benefit from the mid-band spectrum for private networks to support their business-critical operations and enable 5G applications. Use cases for the C-band have been dubbed “exciting” - from VR/AR gaming, to autonomous vehicles, to AR/VR-assisted surgeries, to smart cities, seemingly every industry can benefit from 5G applications in the C-band. 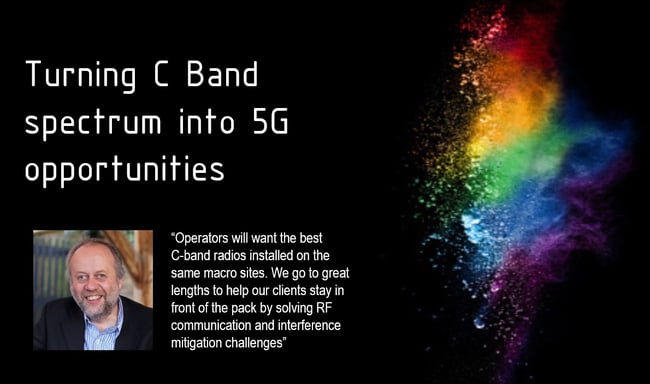 C-band auctions are happening across the world, with countries re allocating C-band for mobile broadband and 5G. In 2020, the Global mobile Suppliers Association (GSA) released a report identifying 23 countries that had already auctioned or allocated C-band spectrum, with some of the first including Australia, Austria, Czechia, Finland, Germany, Hong Kong, Hungary, Ireland, Italy, Latvia, Norway, Romania, Slovakia, South Korea, Spain and the UK, according to Fierce Wireless.

As the C-band frees up for commercial and enterprise use around the world, the demand for specific products that function within the spectrum will increase.

APITech can help telecommunications providers solve these challenges with our capabilities including attenuators, gain equalizers, filters, test equipment, butler matrices, bandpass filters, and diplexers. For example, a diplexer upgrade to the BTS could well help with increasing return on investment for spectrum utilization, by delivery of additional channel capacity which in turn improves end user mobile service experience especially in high usage cells.

How Does 5G Affect Airline Altimeters?

The Analog-of-Things Rise is the Crucible of Digital Innovation

It isn’t news to any professional in the electronics industry, or virtually any other, that almost any technology, proce...