For many years, copper has been used for cables to transmit power and data due being one of the lowest loss transmission mediums and is able to transmit over long distances reliably. Recently, however, copper has seen its supremacy challenged in the shape of fibre optics, which offer faster data transfer speeds, even lower loss rates and a host of other benefits when it comes to size, weight and security.

Optical fibre technology is highly disruptive to conventional copper solutions. Let’s look at some of the benefits of using Optical fibre for Military, Space, Industrial and Medical industries:

A signal transmitted within an optical fibre is not easily intercepted, thus making it intrinsically a more secure transmission media when compared to copper based electrical systems enabling them to be used and routed through otherwise potentially explosive environments, such as oil, gas and petroleum.

Optical fibre is also insensitive to electromagnetic effects; this is a significant advantage over electrical systems particularly in “noisy” environments where cross-talk and electrical noise can corrupt data. 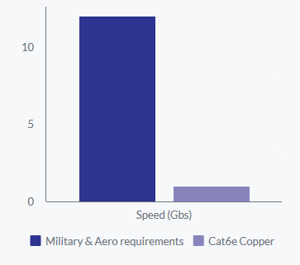 Optical fibre can carry up to 10 times more data in a single core than copper wires.

Commercial data rates possible using fibre can theoretically reach 4 Tbs, although military and aerospace applications in the next 5 to 10 years are thought likely to require 25Gbs +

This compares favourably when compared to Cat6e copper which limits at 1Gbs, this allows significantly more data to be handled per terminal without the need for additional terminals, data buses and the resultant mass increase. 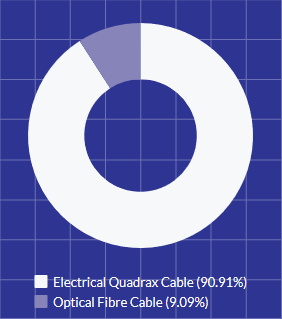 Optical fibres not only enable more data to be transmitted but they are significantly lighter than traditional copper wires.

An electrical quadrax cable weighs 40g/m, the equivalent optical fibre with a 1.8mm protective jacket = 4g/m. This equates to a 90% weight saving.

In modern, multirole combat aircraft there can be many miles worth of cabling, for example the fifth generation F-35 fighter jet features 17 miles of copper wiring, and in larger commercial aircraft this figure is much higher. So it’s easy to see why many industries are making the switch from copper to fibre.

Optoelectronic solutions are physically much smaller and hence much lighter than electrical solutions.

Today’s military aerospace end users are on the lookout for thinner cables with thinner materials to make room for more cores within the existing space, so fibre definitely fits the bill when it comes to saving space.

Telcordia qualification (GR’s 468, 20 & 326) have shown optics is capable of achieving the high reliabilities demanded in today's market. APITech’s proposition is to realise that functionality in a miniaturised footprint to the same levels of reliability.

Fibre is also immune to temperature variations that can be caused by weather changes, moisture etc. these changes can negatively affect the connectivity of traditional copper cables.

Fibre is also less prone to damage through bending and flexing and pulling than copper, which gives fibre a massive advantage when it comes to reliability.

Copper can carry up to 50Gb/s of data but it is the distance and losses that are the defining limitations. The further the data has to travel the more signal loss will occur. In contrast signal loss with fibre optics is negligible.

I addition, Optical fibre has very low attenuation (signal reduction) and therefore can carry data for long distances. As a guide for max unrepeated link distance:

APITech is at the forefront of Optical Transceiver development and our OPTO-FIRETM micro-optical transceiver incorporates and improves critical data communication systems for military aircraft and commercial aerospace, land and sea vehicles, oil and gas, renewable energy and mining for reliable, improved data transfer performance. To explore our range of Optoelectronics, click here.

APITech's webinar, "Copper Can't Cut It" explores the ever-evolving world of data transmissions in space and in our own skies. Click here to register:

APITech has been part of many seminal space journeys into deep space, from the Galileo spacecraft that studied Jupiter a...

Over the years, space engineers have been making great feats in space. However, these feats wouldn’t have been possible ...