This blog provides a brief highlight of several of the key areas the proliferation of wireless technology is impacting current applications, and how these trends are leading to a necessary increased focus on spectrum management. 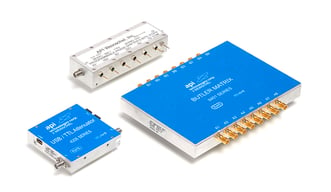 5G has been a buzz word in engineering and telecommunications media for several years. It is just now that early rollouts of 5G technology is beginning to gain momentum. Most early rollouts have been experimental evaluations of 5G technologies, including massive multi-input multi-output (mMIMO), beamforming, and dual-band (mid-band and high-band) cellular frequencies. Most countries and telecommunications providers have focused on sub-6 GHz spectrum for early 5G rollouts, but the summer of 2020 should see 3GPP Release 16 standards, which paves the way for 5G standalone (SA) millimeter-wave use cases. This means that technology capable of operating without the need for sub-6 GHz control plane frequencies should be emerging in late 2020 or early 2021.

This also means that the rollout of millimeter-wave 5G technology will begin in earnest, which may lead to much greater spectrum congestion and interference throughout the microwave to millimeter-wave spectrum. Though telecommunications standards do limit power output in band and out of band, with new and densely installed beamsteering 5G base stations in high reflective clutter environments as well as proposals for “ubiquitous” wireless access, there is a much greater opportunity for systematic and transient interference than ever before.

Concerns over increasing spectrum congestion in the sub-6 GHz bands and the millimeter-wave spectrum (mainly between 20 GHz and 40 GHz for now), have also led to many organizations and applications evaluating migration of their use cases to higher millimeter-wave frequencies where high atmospheric attenuation may mitigate the impact of interference. Some other applications, such as weather metrology, face the potential that 5G and Internet of Things (IoT) microwave and millimeter-wave technology will result in performance degrading interference.

With 5G applications reaching nearly 100 GHz, there are some applications, such as satellite and electronic warfare (EW), radionavigation, and other sensitive systems that are already facing reduced performance from high amounts of interference, which may be worsened by 5G, IoT, and as of yet unrealized terrestrial wireless technologies. There is also a boom in satellite services and technologies using existing satellite spectrum, which may eventually lead to the same trend in the space industry of moving to higher spectrum to avoid the congestion in existing bands as happened with cellular networks.

Though spectrum availability, congestion, and interference are concerns with new wireless technologies, there is also the potential for many mission critical and high-reliability wireless use cases to revolutionize public safety, defense, and industrial systems. Where critical applications are currently looking to fiber optics and other high speed data transferring technology, wireless technologies that provide comparable speeds and very low latency could enable much more flexible, portable, mobile, lower cost, and more widely applicable solutions for applications such as industrial automation, control, security, radar, and other measurement technologies.

How Does 5G Affect Airline Altimeters?

The Analog-of-Things Rise is the Crucible of Digital Innovation

It isn’t news to any professional in the electronics industry, or virtually any other, that almost any technology, proce...