RF components, assemblies, and systems are essential for many of the critical functions for space technology. This includes satellites, launch vehicles, and a wide range of payloads. The exact RF technology used and their requirements are determined by the exact functions of the space technology. In general, the RF technology must meet stringent reliability and environmental conformance specifications. Due to temperature variations, physical aspects of launching an object into space, radiation and interference in space, as well as the nature of a hard vacuum, there are limited RF component and assembly technologies that are compatible with space-flight.

There are also other electrical, mechanical, and sourcing constraints that further restrict the technologies, materials, and fabrication methods that can be used for RF devices in space. This includes the use of millimeter-wave frequency technology in order to reduce the size and weight of certain RF components that exhibit physical characteristics proportional to their operating wavelength. Other considerations include the use of millimeter-wave frequencies to enable much greater operating bandwidths for satellite internet and other high-speed communications capabilities.

The definition of a satellite evolves as new applications and satellite technologies emerge. Newer satellites are also increasingly being configured for multiple missions, or as multi-role commercial assets. In either case, satellites require a variety of RF technologies to operate as a platform for various payloads. For instance, a satellite can operate as a platform for communications technology, weather tracking and science, geolocation, and other strategic and tactical uses.

A basic satellite may only require limited RF technology to communicate and general basic telemetry data, as well as what is needed for control of the satellite. Some recent satellites have been deployed with optical transceivers for inter-satellite communication to help operate large networks of satellite constellations. Some satellites may also include sensing and metrology systems, as well as advanced imaging equipment, such as a satellite telescope. RF equipment may be used to perform sensing, metrology, and even imaging in the case of a radio-telescope. 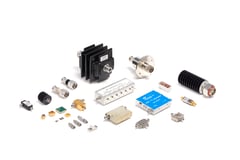 Modern satellite and spacecraft payloads can be as
simple as small metrology equipment, and as complex as multi-beam communications equipment with modular digital payload capability. In previous years, payloads were typically rather large and specialized equipment that underwent many long years of development and qualification. These types of payloads were also usually produced in low volumes. The latest satellite payloads can resemble early satellite payloads but with more advanced digital technology and beamforming antenna, or may even be mass-produced and low-cost miniaturized systems that are highly integrated, or any variation in between. The diversity of modern payloads means that there is also a diversity of RF equipment used with these systems. Some new payloads may even use industrial and automotive grade RF components that have been “upscaled” for use in near-earth orbit applications.
Typical RF Products Used

Over the years, space engineers have been making great feats in space. Mind you; these feats wouldn’t have been possible...

The vacuum of space is a harsh environment with phenomena that can degrade and destroy the materials used to fabricate s...